Monitoring Archive by category "On board detection"

The main research in the last six months (from October 2014 to April 2015) was focused on the following:

To obtain reproducible results from the sample derivatization procedure [1], a careful optimization of several reaction parameters, such as the amount of dervatizing agent, the heating time and heating temperature was performed. The effects of the amount of the derivatizating reactant was added, were examined. Each time sample was injected into an electrophoretic system, the average peak area (n =3) was measured and the condition that gave maximum response (peak area) was selected. Based on the stoichiometry of the derivatizing reaction, the required minimum amount of reactant was calculated (~40 µL per 2.5mg of TDG). Then 2-, 3- and 4-fold volume excess of reactant was applied for the derivatization of each analyte. Based on the average peak area measurements, the maximum response was achieved applying the 2-fold volume excess of phthalic mixture. The appearance of the phthalic acid peak on an electropherogram (unreacted phthalic anhydride) acted as an indicator of a sufficient excess of derivatizing reactant.   For future experiments, 100 µL of reactant per each 2.5 mg of analyte was selected to avoid the lack of derivatizing reactant in real samples. 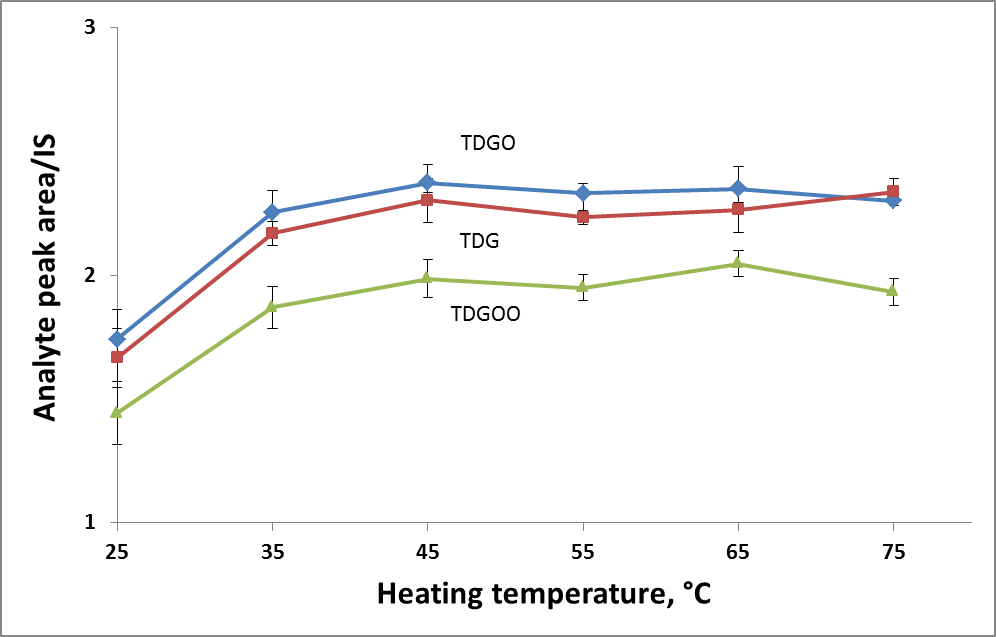 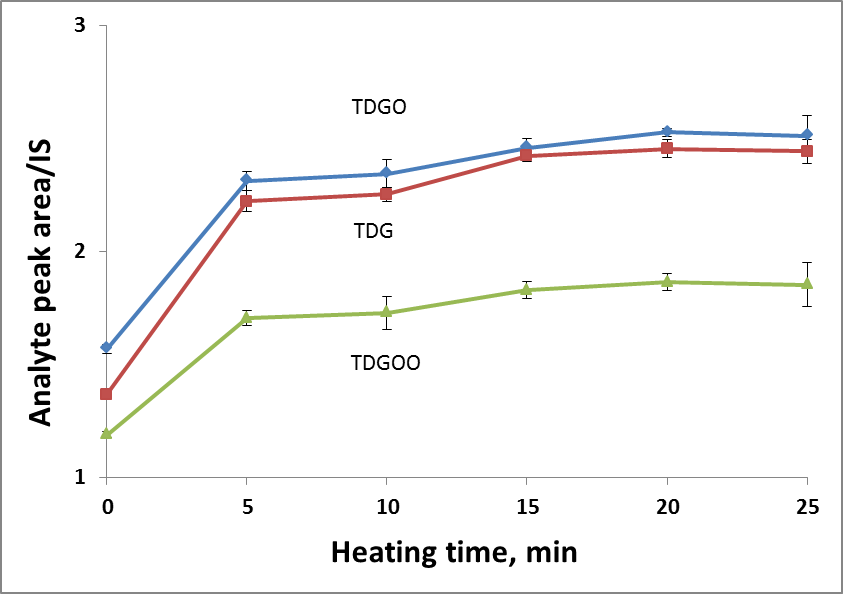 Figure 1. Effect of heating temperature (A) and time (B) on derivatization efficiency

Underivized TDG and its oxidation products are neutral at pH below 9 and, thus, can be analysed using the MEKC separation technique. Applying 50 mM borate buffer with 100 mM SDS and direct UV detection at 200 nm, TDG and TDGO could be separated within 7 min. The LOD for TDG and TDGO was 0.1 mM. The high values of LOD are logically justified due to the absence of strong UV adsorbing sites. In this work, an improved method for the analysis of target sulphur compounds involved derivatization with phthalic anhydride incorporating chromophore sites into the analyte structure and, at the same time, affecting the pKa value of the formed derivatives and giving a charge to the molecules at pH below 9.

The optimization of the separation conditions was carried out by the investigation of the effect of buffer pH, concentration, capillary temperature and applied voltage on separation efficiency.

It is well known that buffer pH plays the key role in optimization of a separation process affecting the EOF velocity and degree of analyte ionization. So, in the present work a 30 mM borate buffer with a pH range of 7.5 – 10.0 was investigated to evaluate the impact on separation results. At buffer pH values below 8.0, the derivatized analytes were unresolved and the peak shapes were asymmetric.  An increase in the buffer pH value to 8.5 led to improvement in analysis time and all analytes were baseline separated. Further pH change to 9.5 resulted in an increase in the electrophoretic mobility of the analytes. Baseline separation was still achieved and the analysis time was the shortest. Unfortunately, starting at pH 9.0, the sulphone peak area was prone to rapid decrease and at pH 10 almost disappeared, which indicated a strong addiction of thiodiglycol sulphon stability from the pH value of the separation media. 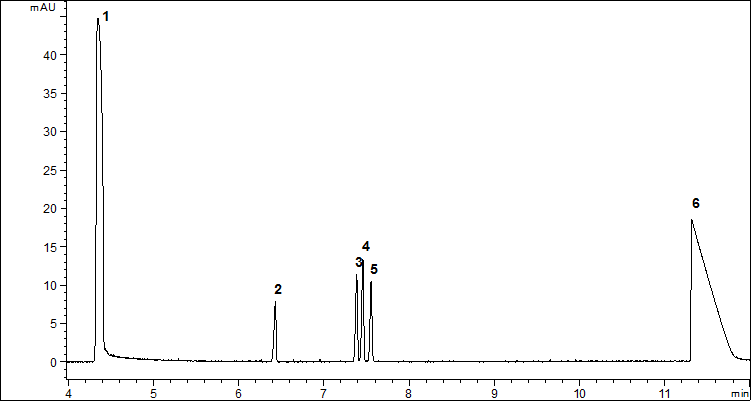 The limit of detection (LOD) and quantification (LOQ) were obtained experimentally by measuring the signal-to-noise ratio (S/N). The lowest LOD and LOQ were obtained for TDG and calculated as 98 ng/mL (S/N=3) and 305 ng/mL (S/N= 10), respectively. 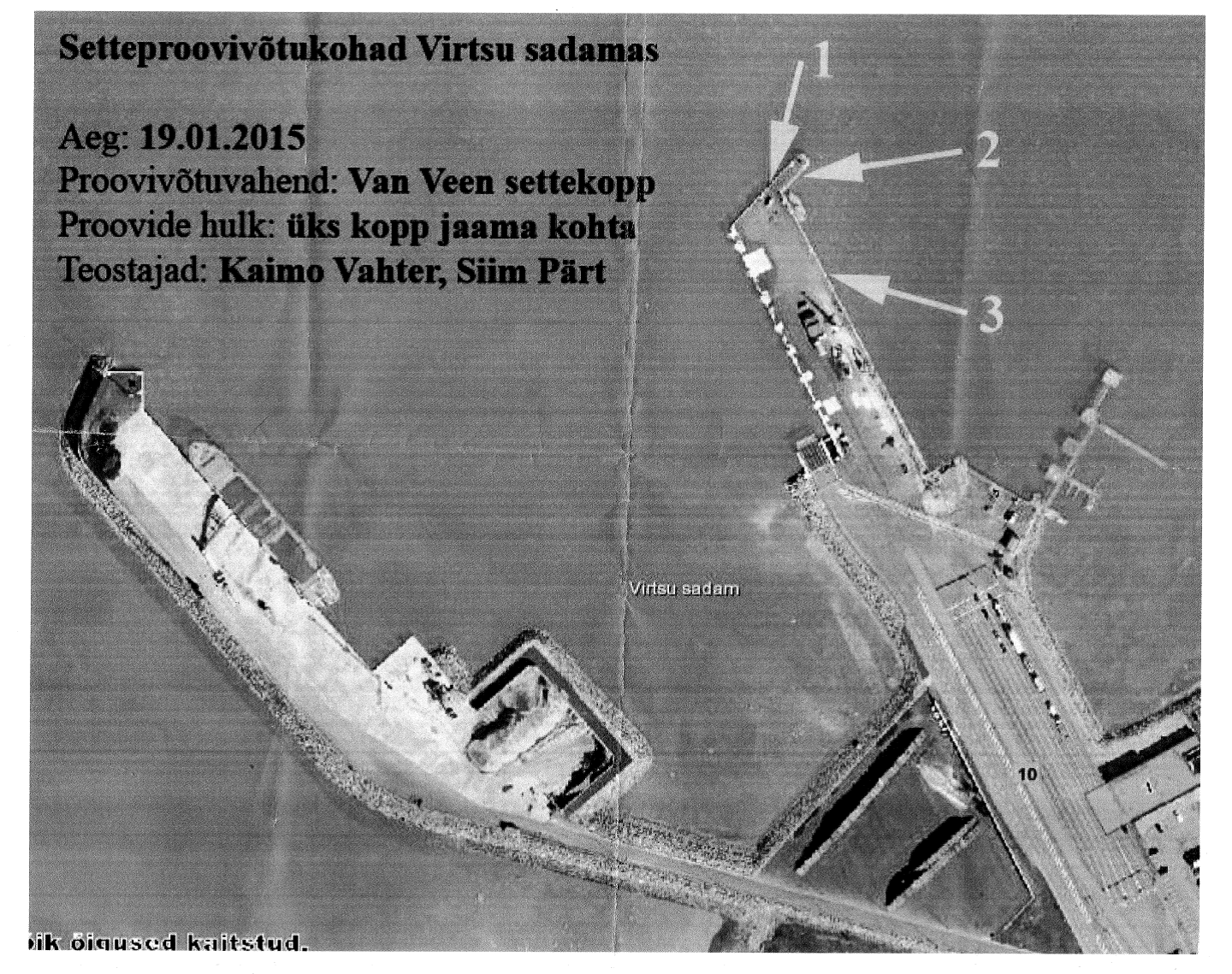 We assume that these samples do not contain the degradation products of sulphur mustard.

The sediment samples were spiked with TDG, TDGO and TDGOO water solutions (final concentration 100, 200 and 400 µM of each). Then the samples were homogenized and shaken for 4 h, after that the samples were placed into refrigerator for 20 h and 7 days.

The collected pore water was concentrated by using powdered carbon aerogel to analyse the content of TDG, TDGO and TDGOO [2]. Acetonitrile was used for the elution of compounds of interest from carbon aerogel. Both acetonitrile fractions (from pore water and sediment) were evaporated to dryness and allowed to the derivatization and analysis procedure as described above. Results for TDG and TDGO (total incubation time 24 h) are represented in Table 2.

Table 2.  Contents of TDG and TDGO in spiked sediment.

It can be seen from the Figure 3 that the adsorption of TDG and TDGO to the sediment is rather similar. 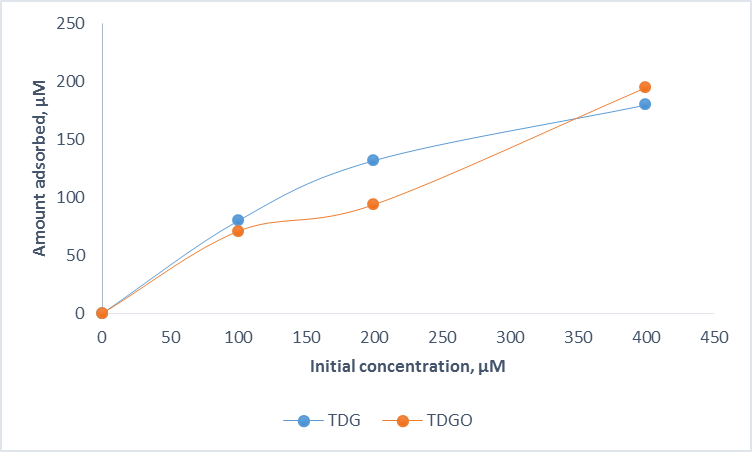 Based on the results of preliminary tests it can be concluded that after the incubation in the refrigerator for 7 days the TDG is completely lost, the concentrations of TDGO and TDGOO are decreased 8 and 3 times, respectively.

The investigations will be continued.